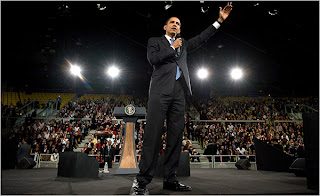 Barack Obama, in his “town hall” brand of public dialog to a European stage today, in Strasbourg, France, said some things that had relevance to Theologians Without Borders.

He did not refer specifically to TWB but he did cite Doctors Without Borders as an example of the type of service that he was seeking to encourage his youthful European audience to get involved with.

Setting the Scene
Obama was asked questions about American foreign and domestic policy but some of the most interesting and pointed questions were very personal. A young woman wanted to know about the president’s approach to the world economic crisis, but also about that dog, the White House pup that Obama has promised his kids.

“Did you ever regret to run for president?’ a young woman from Germany asked.

Cost of Public Service
After speaking candidly about the way the presidential campaign took him away from his family and the cost of public life to his personal freedom and anonymity he made these fascinating statements about service and voluntarism.

Right? I mean, they’re all — (cheers, applause) — you might volunteer in your own community.

If You Only Think About Yourself
But the point is that what I found at a very young age was that if you only think about yourself — how much money can I make; what can I buy; you know, how nice is my house; what kind of fancy car do I have — that over the long term, you — I think you get bored. (Applause.) I think your life — I think your life becomes — I think if you’re only thinking about yourself, your life becomes diminished and — and that the way to live a full life is to think about, what can I do for others? How can I be a part of this larger project of making a better world? Now, that can be something as simple as making — of — as the joy of taking care of your family and watching your children grow and — and succeed.

But I think especially for the young people here, I hope you also consider other ways that you can serve, because the world has so many challenges right now. There are so many opportunities to make a difference. And it would be a tragedy if all of you who are so talented and energetic, if you let that go to waste, if you just stood back and — and watched the world pass you by.

Image: President Obama on Friday spoke at a town hall meeting in Strasbourg, France, on the eve of a NATO meeting.