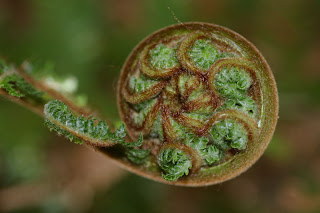 In an address to pastors and their spouses at the New Zealand Baptist Annual Gathering (6 November 2008), Paul Windsor, who is concluding as Principal of Carey College, spoke insightfully about the New Zealand koru (pictured).

He spoke of the koru as a rich image for theological educators and others [You may have seen a stylized version of the koru on Air New Zealand planes].

Here is his excerpt:

Animating Image
The first image I want to draw to your attention is the koru. I think whether it is as a husband or a father, or a pastor, a lecturer or a Principal, the koru is the most animating image that I know.

I have planted one outside our front door and I love to go off to work citing it and allowing it to be part of the motivation for the day ahead.

Watching a tight, embryonic, furry ball gradually unfurl into something that is supreme in its elegance, its beauty, its perfection, its fullness and its breadth—I just think it is so animating in terms of working with people.

Mandate Wrapped in Furry Ball
And I think it is the Kiwi picture of one of the mandates for the church today. I think if the Bible was being written today in New Zealand it would be full of references to koru. After all, a core task of being a pastoral leader is to prepare God’s people for works of service so that the body of Christ may be built up until we all reach unity in the faith and in the knowledge of the Son of God and become mature—fully unfurled—attaining to the whole measure of the fullness of Christ.

Pleasure of People Unfurling
I love watching people unfurl and within the communities of people to which I belong I like to see the people—the students, the staff—as a club of koru that are at different stages of unfurling.

Leadership is about setting up ‘Operation Unfurl’. It’s the great blessing. Here are two observations:

Unfurling from Pain and Failure
Sometimes that furry ball is more crushed than it is embryonic. It is not just packed with potential but it is wrapped with pain, fear, failure and insecurity. It hasn’t opened up for those reasons and it is not uncommon in my life with students to see people in a fetal position as adults in terms of their growth.

One of the great joys is watching older students reengage with study having remembered their time at school to be full of failure and discovering that they have a brain. It is such a joy!

And then in more recent years the students have been younger and I sense that some come to training and they are crushed in spirit. Things haven’t gone well with parents and teachers and to be part of believing in people more than they believe in themselves is something that Barbie [Paul’s wife] and I have talked a lot about.

There are aspects of our cultural context that are rotten in my opinion—the fear we have of giving people big heads, the obsession about not allowing tall poppies to grow and the value of [being] close enough is good enough. I think for me the joy of visualizing what the end could be in someone’s life and then to be a small part of the means by which that end might be reached through encouraging and believing, advocating, praying, correcting—that’s the great joy and the great blessing.

Don’t Steal God’s Job Description
The other thing I would say is that the unfurling of the koru is not actually something that we do. I don’t go in there and reach into that tight, little furry ball and pull out that branch.

In our hyper-competent, over-resourced world, which is what we are, it is easy to steal God’s job description, get in there, feel the power and take control of people’s growth. I don’t think that this is part of our job at all.

So ‘Operation Unfurl’ keeps reminding me of the theocentric nature of leadership and mission. What will leadership look like if we believe that ‘I planted, I watered, I nurtured, I weeded and I pruned—but it is God who brings the growth?’ I try to create the conditions for unfurling. I try to make space and margins for God to do His thing.

I tell my preaching students: Recognize that people’s lives have been halted. They are hungry, angry and tired. Minister to that and let God bring the growth. That means being patient as God changes the seasons according to His timetable.