Kindle an Interest in Theological Literature 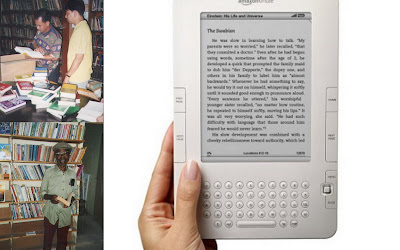 Bring the Parchments
I recently wrote about Rob Bradshaw (you can connect with him here on Facebook), concerning his ministry of making articles available online.

Subscribing to his web sites by RSS feeds or becoming his friend on Facebook will give you regular reminders of all the articles that Rob is kindly making available online.

Providing Books and Articles
Rob is also associated with Book Aid that provides Christian literature to areas of need. Check this site for ways of contributing to this ministry as well as learning how you or your seminary might receive books.

The British organization is a welcome addition to other individuals and groups that I have previously mentioned that are working to get books across the borders.

Some of these groups are finding that while the books are gratefully received it is becoming increasingly expensive and almost prohibitive to ship the books.

The Literary Future
I have posted articles elsewhere on web resources, wind-up laptops, Librivox and Moodle.

With an increasing number of reviews appearing about Amazon’s 2009 Kindle, one wonders whether this technology, accompanied by translation technology, will be a precursor to the shape of things to come in terms of making theological literature accessible.

Image: Books arriving via Book Aid to Nigeria and the Philippines plus a close up look at the Kindle.