Elephants, Theologians and the Bottom Line 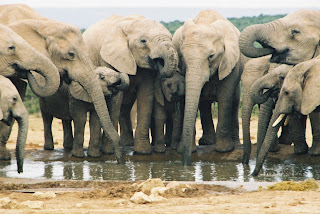 I was visiting Thailand recently and was reminded not only of the fact that the elephant is their national symbol but the way this animal is loved. My visit coincided with National Elephant Day in Thailand and as a mark of appreciation the elephants were paraded and served a special ‘buffet’ of fruit and vegetables.

Throughout the world elephants are almost universally admired for their unique appearance, their intelligence and their amazing memory. Some reports of the 2004-2005 tsunami in Thailand noted the super sensitivity of elephants who, “went crazy as they bellowed, broke their tethers and headed upland,” a long time before the waves struck the coast. The number of proverbs relating to elephants is a sign of the qualities humans attribute to them. Writer and preacher, F W Boreham has an interesting essay on the way the term, ‘white elephant’ has come into our language.

An office I used to visit regularly had a sign on the window with these words:

“Getting things done around here is like mating elephants. It’s done at a very high level. It’s accomplished with a great deal of bellowing and it takes two years for anything to be produced.

Some recent research into the plight of elephants has highlighted the stress and grief facing these social animals when their relatives have been killed by poachers.

One of the innovative campaigns intended to raise public consciousness about the evil done to elephants is the [golden!] award winning ‘Great Elephant Poo Poo Paper Company’. Elephant dung is collected and processed into odorless paper. One turd, they state, can be transformed into 25 large sheets of gift paper which they sell with other paper products through their online ‘Pootique’. The news of the award and this poo to gift paper business caused comedian, Jay Leno to get to the bottom line and remark, “I hope they provide self-sealing envelopes!”

Here is one fascinating glimpse into elephant behavior that is used to illustrate the cross cultural insensitivity of some human beings:

A person talking about her experiences of living in East Africa told a group of people what happens when a herd of elephants approach a water hole that is surrounded by another herd. She said the lead elephant of the second group turns around and backs down toward the water hole. As soon as its backside is felt by the elephants around the water, they step aside and make room for it and this is the signal to the others that the first herd is ready to make room and invite them to the water.

And then the person talked of how she and her colleagues had gone to work among a tribe in Eastern Africa and she confessed, “Unlike the approaching elephants we did not back in.”