The Future of Theological Education in Euro-Asia 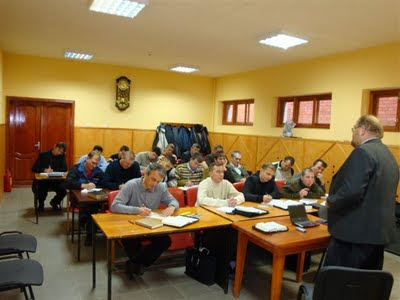 Fascinating report just come in about the future of theological education in Russia and beyond.

Shrinkage – Necessary but Unhealthy
Moscow/Odessa — A US-American active in Russia reports that the Southern Baptist Convention needs only five seminaries to support the ministry of its 16 million members. The countries of the former Soviet Union, which today may have as many as three million evangelical believers, host roughly 150 seminaries and Bible schools.

In an interview in Odessa this summer, Dr. Sergey Viktorovich Sannikov (Odessa), Executive Director and founding father of the “Euro-Asian Accreditating Association” (E-AAA), responded: “It’s very clear the number of theological schools will and must decrease. But it would be incorrect to label this process as one of ‘healthy shrinkage’.” Too many careers and patterns of foreign support are on the line – the process can therefore only be a painful one. “There was no strategic plan when these schools were founded – they were spontaneous creations. People were enthusiastic, Western support was available, and so they began.”

Sannikov added that the E-AAA is doing what it can to soften the blows. Extensive discussions on the Internet between leading educators are taking place. “We are encouraging schools to develop their own unique programmes or to merge with other ones. Each institute will need to have its own, distinctive face; each will need to find its own niche.” Diversification is needed – especially when a geographical advantage is not evident.

“Moscow Theological Seminary”, the flagship of the “Russian Union of Evangelical Christians-Baptists”, is one of the institutes actively involved in gathering branch institutes under its umbrella. Sannikov stated: “I think this is a very good development, especially in Russia. The government and economic conditions are putting pressure on smaller schools. Smaller institutions recognise they can work more effectively if they use the teachers and programs of a larger institution. Structural problems are being corrected: Larger institutions can much more effectively organise libraries and other resources and transfer them elsewhere.”

E-AAA’s head, a Ukrainian Baptist, also believes that, at least for the next several decades, the number of interdenominational educational institutions will not grow significantly. “Denominationalism is increasing rapidly,” he warned, “except among some of our youth. It is very difficult to somehow renounce one’s own denomination if one believes it to represent the sole truth.” Even tiny denominations such as the Wesleyans – not a part of the Methodists or Nazarenes – have their own school in Moscow. Moscow’s “Spiritual Academy of the Apostle Paul” also represents a very small constituency. A second, small “Moscow Theological Seminary” headed by Gennady Sergienko closed several months ago. One such interdenominational school is “Moscow Evangelical Christian Seminary” (See press release 09-14 from 28.4.2009).

In a few instances, expansion is still occurring. This is especially true for the Neo-Charismatic movement, which, despite very large number of “students” in congregations, is only now beginning to develop institutes capable of seminary-level training. Citing its geographical advantage, Greater-Europe-Mission-sponsored “Zaporozhye Bible College” just north of Crimea is involved in a major building programme.

Fifty-five of the roughly 150 institutes in the former Soviet Union are members of the E-AAA: 28 of these are in Ukraine, another 15 in Russia (seven in Moscow). One member each is found in Belarus, Moldova, Armenia and Lithuania. The Baptist seminary in Akademgorodok near Novosibirsk and a Baptist school for expository preaching in Samara/Volga are not members. Five to six years ago, the E-AAA listed a total enrolment of 7.000 among its members. Sannikov is unsure as to whether that number has since decreased. Counting enrolment has always been problematic: A Ukrainian school and E-AAA-member which has been teaching by extension for ex. has claimed an enrolment of 5.000. And how long are students to be considered enrolled if they have begun a programme without completing it? Consequently, the E-AAA has recently developed criteria for counting enrolment, hoping it will better reflect the true nature of an institution’s work.

In Central Asia, Tashkent/Uzbekistan has an officially-registered Baptist school; a second one allied primarily with Pentecostal and Charismatic circles is active in Almaty/Kazakhstan. Ukrainian institutions are involved in aiding several unregistered schools in the Central Asian republics. None of these have been accredited by the E-AAA. In addition, not a few future Central Asian pastors come to Russia or Ukraine for theological training.

The E-AAA, which was officially founded in 1997, includes Pentecostal, Lutheran, Presbyterian, Baptist and interdenominational schools – Adventist ones are lacking. Though several institutes are located elsewhere, the E-AAA regards itself responsible for Russian-language schools within the area of the former Soviet Union. Director Sannikov is keen to point out that the E-AAA did not develop its criteria for granting accreditation – it is not a state-recognised accreditation – on its own. It is the youngest regional member of the “International Council for Evangelical Theological Education” (ICETE). Founded with the support of the World Evangelical Association in 1980, the ICETE’s seven regional divisions now cover the globe.

The work of the E-AAA is funded by its 55 members. Regular dues are paid; an additional fee is charged for every student enrolled in an accredited programme. Expenses for the visits of E-AAA-delegations to its member schools are also paid by the host. Sannikov points out that the E-AAA does not restrict itself to issues of accreditation. Its research wing, headed by Taras Dyatlik (Rivne/West Ukraine), publishes a paper journal and books as CDs, gathers historical documents and promotes manuals on leadership. It holds conferences and training seminars for teachers; the results of which are often published. One recent project focused on the effectiveness of theological training in Euro-Asia. This research centre is not funded by the member schools – it receives grants from interested foreign agencies and foundations.

Beginnings in Odessa
Dr. Sergey Sannikov has a long history of involvement in Russian and Ukrainian theological education. When the Soviet-era “All-Union Council of Evangelical Christians-Baptists” opened its first seminary for on-location study in January 1991, Sannikov was its rector. But quarters in Moscow’s historic “First Baptist Church” were extremely cramped and a library was virtually non-existent. As a result, the decision was made after one session to transfer to Odessa, where a regional Bible school founded in 1989 had sufficient room. In two years, after the logistic issues were solved, the seminary was to return to Moscow.

Yet the liquidation of the Soviet Union in December 1991 and the splitting up of the “All-Union Council” shortly thereafter created a completely new setting. Initially Odessa remained the seminary of the new Ukrainian Union; a second seminary was opened in Moscow in 1993. The focal centre of Ukrainian seminary training is now located at Irpen just west of Kiev.

For political reasons, Sannikov believes it wise that the old Baptist Union was divided. It was not politically expedient to answer to Union headquarters located in a foreign country. “We do not need organisational unity to express the unity we feel in Christ,” he explained. “I do not suffer because of our separation.” But he admitted that spiritual costs are involved: “There is a certain nationalist movement in our congregations, and it has a negative influence on the life of the church and our relations with one another. One group stresses the Russian, another, the Ukrainian. I cannot say that one side is guiltier than the other, but every congregation has people who place too much stress on issues of nationality.”

But the E-AAA-Director believes Ukraine will remain a bridge between East and West for the foreseeable future. “Ukraine will not be pressing as hard as Georgia to enter the European Union. We are not Russian – we have a different mentality. We played a role in the middle between the 16th and 18th centuries. Perhaps we will always be in the middle – neither Europe nor Asia. But that is really quite OK!”

A release of the Department for External Church Relations of the Russian Union of Evangelical Christians-Baptists. It is informational in character and does not express a sole, official position of RUECB-leadership.