‘Telepresence’: the next step from Video Conferencing 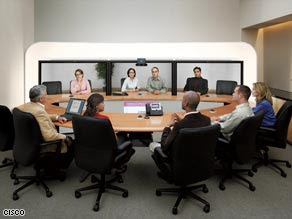 “I’ve seen the future and it’s amazing. What I’m about to describe has to be seen to be believed.

I’d gone to the UK offices of Cisco to report on the latest innovation in the field of video conferencing, ‘Telepresence’. My expectations weren’t high, but what I saw was so exciting that I bored friends, family and colleagues with talk of it for days afterwards.

Imagine this — a plush, soothingly lit and acoustically treated room containing what looks like an oval shaped meeting table and eight executive chairs. A man is seated on one side of the table and as I’m ushered to a seat opposite he raises a hand in greeting and introduces himself.

But as I adjust to my surroundings I begin to realize that all is not as it seems. The man on the opposite side of the table is in fact thousands of miles away in California. What I’m sitting at is, in fact, half a table pressed against three high-definition plasma screens. What I’m seeing is an optical illusion.

The clever positioning of cameras and microphones coupled with the high quality image and sound, plus the fact that there is no delay whatsoever makes it utterly convincing. I can see the hands on his wristwatch and the whites of his eyes. And he is seeing the same quality image of me in his almost identical room on the other side of the world. The effect is so convincing that I constantly have to remind myself that we’re not in the same room.

See the ‘Telepresence’ system in action, and hear more about the potential positive impact it will have on business and the environment in this month’s CNN Business Traveller.”

Furthermore
The ‘Telepresence’ method appears to be a step up from the jerky pictures and people in different centres appear to look as if they are present in the same room. The technology and suites are expensive but businesses are saying the equipment will pay for itself as the air travel budget decreases. They highlight the significant environmental advantage when there is less flying.

How would this translate for theological education? It looks like a significance advance in technology but issues of cost and transmission will delay a take up by seminaries.

Image: “No more tiny monitors and jerky pictures. Telepresence is designed to capture the gestures and expressions of human communication.” Photo courtesy of CNN.