Tales of a Theologian Crossing Borders 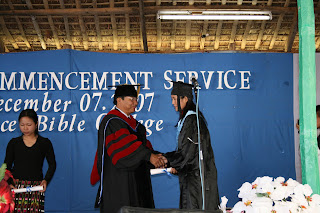 I have recently returned from speaking at an annual conference in Manipur, North India. The hospitality was generous and the people were responsive, appreciative and questioning.

I had been asked to give five addresses but this ballooned out and there were several extra things I had to do on the hoof.

I was glad that flights meant that I arrived early and as someone had left a doctoral thesis in my room I was able to learn the story of the coming of Christianity to South Manipur and the development of the Evangelical Baptist Convention (now in its 59th year). I found I could put snippets of the story into every address and this helped me to understand better the people and be both affirming and questioning of their culture.

In 1904-5 during the Welsh revival, Watkin Roberts of Caernarvonshire in North Wales went to these meetings and became a follower of Jesus. To add to his spiritual development he supplemented church attendance with conferences and in 1907 he attended a convention in Keswick and responded to the need for Christian workers in Mizoram, N E India.

When Roberts got to Mizoram he gave out basic medical supplies and literature. A woman in Wales sent him a gift for his own use but he used this to purchase 104 copies of John’s Gospel in the Lushai (Mizo) language. He gave these to every chief in Mizoram but one copy reached the chief in neighboring South Manipur. The chief read the booklet and was entranced. He wrote on the flyleaf these words, before sending the book back to Roberts: “Thank you for this gift. Please come yourself and tell us more about this book and more about your God.” Watkin Roberts took this as a Macedonian Call—‘Come over and help us!’

Roberts arrived in the Senvon Village, South Manipur and taught people for only ten days. Two Manipureans went back with him, became Christians and then he sent then back. The work was far from easy and there was severe persecution.

It was my privilege to share with people over these last few days and to meet people of the Paite tribe whose churches now spread from Manipur to Assam, Nagaland, Meghalaya, Myanmar, Mizoram and even as far as Delhi. The vigor of the churches was impressive and the seminary community was making great strides.

Three things that were important 100 years ago and are necessary today:
* The willingness to cross the borders when one hears the call, ‘Come over and help us’.
* The light and life that comes from the Scriptures.
* The ministry that empowers the locals.

Image: It was a joy to share in the annual Commencement Service.