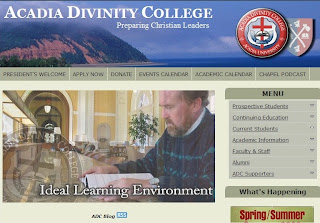 When visiting Sean Winter’s blog site, Sean the Baptist, I came across his recommendation to visit the web site of the Acadia Divinity College in Nova Scotia.

Having written earlier about the new and increasingly essential nature of the Internet and web site to many seminaries, I was impressed with all that Acadia is offering to the world from Nova Scotia, Canada—the President’s welcome, course information, an events calendar, an academic calendar, ways of donating to the seminary and much more.

The Arcadia web site also has:

Regular written news and resource postings, to which you can freely subscribe. This does not make you a member like many subscriptions do when you sign up but a subscription means you get an alert (in your inbox or reader) when there is another posting

Podcasts of chapel preachers. I enjoyed listening to a sermon by Dr Bill Brackney in which he spoke about the meeting of North American Baptists being joined in unity through a new Baptist Covenant. You can also subscribe to these podcasts which means another alert every time a chapel service is posted. 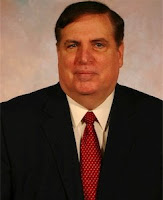 Video Lectures including this sampling:

And More…
Some faculty members have videos posted on their faculty page like Bill Brackney’s video of him in a dialogue on Public Issues.

Value
+ For people like me, who are living countries away from any seminary or seminary library, web sites like Arcadia’s offer wonderful theological resources.
+ These web sites say much about the seminary, they become effective in recruiting and they contribute significantly to the promotion of the institution and its many events.
+ If a web side has a rich bounty in its ‘shop window’, people will ‘bookmark’ the site, make it one of their favourites and freely subscribe to their regular offerings.