Not Lost in Translation in Bali 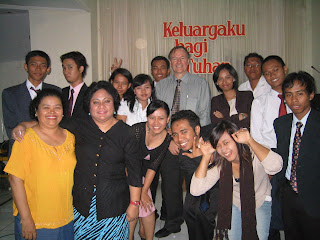 In an earlier posting I profiled Australian, Litha Heshusius, who had volunteered to minister at a large conference in Bali of women from Indonesia and surrounding countries.

Among other responsibilities Litha was acting as an interpreter and I mentioned how Litha’s service was a variation on the Theologians Without Borders ministry.

The conference has been running this week and here is a brief progress report just received from Litha:

So far the conference has been great and inspiring.

The Minister for the Empowerment of Women and representatives of the Indonesian Women’s Department came and opened the conference, along with the representatives from the Governor, and the local Mayor.

It was great opening ceremony – sorry I couldn’t send photos but when I get back I will.

I have met many people from 22 provinces of Indonesia. Every province has made their own cultural contribution in such ways as dancing and singing. I was very impressed.

The organizers work so hard including, Ingrid Subagyo (leader of Women’s Department, Union of Indonesian Baptists), who has done a marvelous job.

The speakers are Patsy Davis, Lorraine Walker and Chio Murakami and some from Indonesia.

The speakers have contributed wonderful messages and I have been helping with the translation.

Tonight I’ll do it again, helping Lorraine with the translation and so please pray for us.

Tomorrow will be the last day, and I believe everyone has enjoyed the conference so far.

It is good to receive progress reports. Do pray for the speakers, organizers and interpreters as they conclude activities and for the ongoing working out of the Word as delegates return to their regions and countries.

Image: A picture taken when I conducted workshops in Indonesia as a TWB. Ingrid was my interpreter for the training conferences and workshops. She is second from the left in the front row. This workshop on Conflict Resolution was held in Surabaya, Indonesia’s second largest city (7 million greater Surabaya) which is situated in the province of East Java.