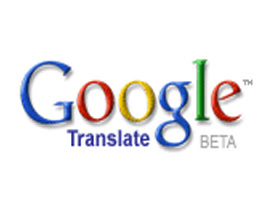 I have worked to translate the basic information about Theologians without Borders into many different languages.

I am also conscious that I am writing these postings in English which poses a barrier for many people for whom English is not their first language.

I am grateful to Rick Turoczy at ReadWriteWeb for publishing an article that has alerted me to the power of the Google Translate technology.

Rick writes:
“If you’re like most folks interested in technology, you likely have a feed reader full of hundreds of RSS feeds on your favorite topics. No doubt, they all have one thing in common: they’re in a language that you’re capable of reading.”

“But what about all of that interesting news and information that’s written in languages you don’t speak? Get ready to have access to even more information about your favourite topics, because now Google Reader leverages Google Translate technology to convert any feed to your preferred language.”

“To use the new offering, subscribe to any feed. Once subscribed, select “Translate into my language” from “Feed settings…” and the feed will be automatically translated to the best of Google’s ability, based on your default language preference.”

“I tested the service against Cybozu Labs – a feed that comes through RSS in Japanese – and was pleasantly surprised. While a few of the characters remained, the majority of the content came through. Not only that, but the content was translated in a way that was legible and coherent.”

“While at first blush, this may seem to be a minor feature, it actually holds the potential to change the way people read feeds – and the feeds they choose to read. It will be incredibly interesting to see what non-English blogs start growing in popularity now that they’re no longer hindered by limited linguistics.”

“But how will people find these blogs? That’s the other thing that makes the translation feature so interesting: it appears to work on shared items, as well. Now, you can start reading and sharing information in any language with all of your Google Reader contacts – regardless of the languages they speak.”

“And once we start breaking down those language barriers and sharing ideas with more people, that may be a real step toward a truly World Wide Web.”

Have a try with Google Translate. I subscribed to Cybozu Labs in Google Reader and it translated perfectly for me.

Hopefully resources like this will break down the barriers of language.

Thanks to Rick Turoczy for this article which I have quoted here in full especially for non-English speaking readers of this web site.