Get an Inkling into Creativity 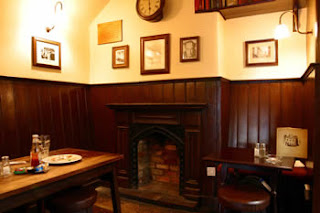 Further in the series of fostering creativity in theological education, here is a tip from the literary world that can apply to any sphere.

“Evening in Oxford, a few days before Christmas 1940. A bracing wind sweeps along St Giles and it is threatening to snow. Ensconced in their favourite pub, the Eagle and Child, a group of men sit around a plain wooden table each nursing a pint of beer while a few cup their pipes or draw on cigarettes. The room is filled with smoke and talk. Then one of the men, portly, balding and ruddy-faced, stands up and the others stop talking. Into the quiet fall the sounds from the pub: the hubbub of men making merry at the bar, the clink of glasses, laughter and raised voices.”

“The man clears his throat and tells the gathering that he has something a little different for them and that he hopes they’ll like it. It’s a piece of comic drama, he says, written in the form of letters from a senior devil to his nephew, an apprentice demon, in which he offers advice concerning the best way to capture the soul of a human. A couple of the party laugh briefly and there are smiles all round as the reading begins.”

“The reader is Clive Staples Lewis, always known to his friends and family as Jack. We are eavesdropping on a meeting of the Inklings, an informal literary group who, for more than twenty years between the early 1930s and the 1950s, gathered at least twice a week in pubs and college rooms in Oxford. At these meetings the members, most of them university dons and writers, read to the others their latest efforts and appraised each other’s work as the beer flowed.”

“Lewis speaks eloquently, telling his story in a deep, resonant tone, his rounded, precise English tinged with a faint Irish accent. Adopting voices and pulling faces, he enthralls his listeners, recounting his tale for fifteen minutes before returning to his chair to hand the floor to the next reader. A few moments later a chair shuffles across the wooden floorboards and Professor Tolkien stands up, pipe in hand. He takes a sip of beer, arranges his papers as the others look on and then begins to read.” (p1-2)

C. S. Lewis biographer, Michael White goes on to describe the seven or eight who made up this loose grouping of literary figures who would read to each other their unpublished work.

White said the meetings of The Inklings were “immensely influential.” Later in the book he adds this estimation:

“In 1996 soon after the first literary polls naming J. R. R. Tolkien as the most popular author of the twentieth century and placing Lewis’s The Lion, the Witch and the Wardrobe high in the ratings, journalist Nigel Reynolds commented: ‘[the poll] suggests that the Inklings, a 1930s Oxford drinking club has been a more powerful force than the Bloomsbury Group, the Algoquin set in New York, Hemingway’s Paris set or the W. H. Auden Christopher Isherwood group of writers of the 1930s.’”

Criteria
You may not like the exclusivity of this literary club as the membership changed very little. Or perhaps this was why it succeeded for so long. 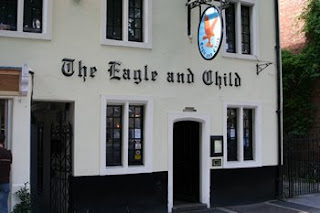 So What?
So much creativity is stirred by interaction that is informal yet which happens in regularly planned get-togethers of people who enjoy and trust each other. Unfortunately for the Inklings this trust and friendship was later tested but it served its creative purposes for many years.

Theological Creativity
Too often theological education is seen as that which happens in formal lectures, classes and tutorials but the Inklings illustrate that much learning and creativity can flow in cafes and restaurants in a context of conviviality.

Pictures of the Eagle and Child don’t suggest a 5 star ambience. Warm English beer may not be your favoured brew and smoke-filled rooms are in most countries a thing of the past.

Question
What might you and your colleagues do together to adapt the wise practice of the Inklings so that in your planning and learning you ensure that the creative juices might truly flow?

A review of this book appears on the web site Reviewing Books and Movies.

Image: Interior and exterior pictures of the Eagle and Child; the plaque on the wall. 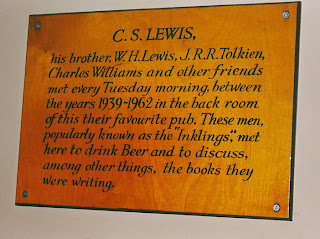