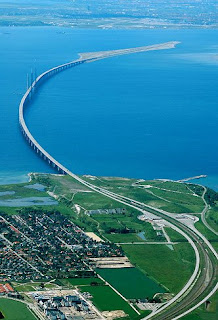 Motivation for Change
From 1928 the Danish Baptist Seminary had been in existence but toward the end of the twentieth century there were serious questions about whether it could survive.

According to Principal Bent Hylleberg, the old Baptist Seminary was rurally situated, 60 km from Copenhagen. Learning was campus-centered, it was mono-denominational ‘the Baptist College’, its reason for being was primarily to train people for the pastoral ministry, it was in maintenance mode, it had a traditional curriculum, the non-academic setting was not helpful, the three year programme had no accreditation and there were only five to seven students with two teachers. It was hardly viable and it needed partners to survive.

Building Bridges
It so happened that a new bridge (the Oresund) between Malmø (Sweden) and Copenhagen (Denmark) was being built (construction started in 1995) to unite the two cities thus creating the largest city area in the Nordic countries.

The Danish Baptist Seminary leaders contacted the church-based theological school in Malmø two years before the new bridge was completed (it was opened in 2000) asking for a joint venture in education. At the same time they invited the small Danish free churches into the process, the Pentecostals, the Covenant Church and the charismatic branch of the Lutheran State church to join them.

Not satisfied with simply enlarging the student community and teaching staff the vision was to create a new model to provide church-based theological education, to train leaders for missional churches in an old Christendom-culture and to get an academic accreditation in the Swedish educational system.

Add Some Salt
So there emerged the Scandinavian Academy of Leadership and Theology (SALT), a group of churches and theological schools that have worked together to create a relevant training for the contemporary church.

SALT is a joint venture of Örebro Mission School (S), Hyllie Park Folk High School in Malmö (S), and the following partners in Denmark: Baptist Theological Seminary, The Pentecostal Church in Copenhagen, The Lutheran organization OASE, and The Covenant Church.

The SALT partners have agreed on a Mission Statement. SALT belongs within the framework of theological traditions formed by international evangelical theology, the charismatic renewal, and the quest for Christian unity as professed by the ecumenical movement.

The purpose and goal of SALT is:
+ To provide a church based theological education for the leaders of the contemporary church.
+ To focus on the identity of the Christian Church and its mission in a pluralistic and international environment.
+ To contribute to the renewal of theology from a mission oriented perspective.

* SALT offers a richly faceted and flexible education with opportunity for specialization.
Students can study full time as well as part time, use the distance study opportunity or attend single courses.
* SALT, therefore, seeks to meet the needs for education of preachers, as well as evangelists, youth workers, music workers, social workers, etc.
* SALT offers a church based theological education. The academic theological studies are always related to the missionary mandate of the church and to the current challenges in church and society.

The education has two main components:
* Studies, aimed at providing thorough knowledge of theological subjects.
* Church work and mentoring.
* SALT provides teaching and learning in four different ways: The class room, Study groups, The Internet and Special assignments.
* Due to the church related nature of many of the SALT courses not all of these can be accredited. SALT is seeking international relations in order to provide possibility of having the full three year program accredited officially.

Since 2000
SALT now has about 30 students, 5 teachers (2 full time and 3 half time) + 1 working on his PhD.
* It is an inter-confessional community thus bringing enrichment.
* It is multicultural (5 partners in DK; 3 partners in Scandinavia)
* It is church-based education, with mentors appointed from churches
* Students are located in a congregational setting
* Students are two days per week in the Academy (Copenhagen/Malmo)
* The focus is for training people for leadership with the provision of different tracks according to the gifts and calling of students
* It has an urban setting with an academic milieu and is richer with theological partners
* Accreditation comes from Orebro Theological University, Sweden
* The degree offered is a three year Bachelor of Theology
* A Youth Ministry programme is accredited by Bristol College, UK

Further
In 1999, Bent Hylleberg (then the Principal of the Danish Baptist Seminary) presented a paper to the Academic and Theological Work Group of the BWA when it met in Dresden. This paper gives more background to this bridge-building in theological education but in 1999 the new model was still being created, hence, like the Nordic bridge, it is an unfinished story. Bent’s paper can be downloaded from this link: Denmark as a Case Study in Theological Education.

A further developmental stage is that SALT is now linked into a Consortium of Baptist Theological schools in Europe (CEBTS) which is designed to give mutual fellowship and support and is looking at practical cooperation in such things as library resources, common registration of courses and staff sharing.

The bridge linking Sweden and Denmark is most often referred to as Öresundsbron or Øresundsbroen, respectively. The bridge company itself insists on Øresundsbron, a compromise between the two languages which would symbolize a common cultural identity of the region. Perhaps this name is symbolic also of the kind of compromise that needs to be made by partners in a theological enterprise which stretches across denominations and cultures.

Image: The Øresundsbron, which links Sweden and Denmark, a symbol of new bridges in Scandinavian theological education; Bent Hylleberg, principal.